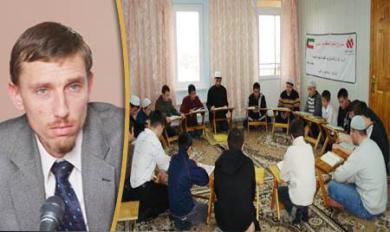 Siran Arifov, Islamic scholar and head of Al-Radwan Center for teaching the Holy Quran ensured that his center strives to prepare suitable and moderate Imams to lead Crimean mosques, working to correct the distorted image of Islam.

He stated during his speech to “Islam Online” that 25 Ukrainian and Tatar reverts currently attend the center in addition to other Muslims and Arabs from within the community attaining its three year program. During this period, the center provides the students with housing, food, and transportation.

- Can you tell us about Al-Radwan Center?

The main goal of Al-Radwan Center is to strengthen the connection between Ukrainian Muslims in general, and more specifically Tatar Muslims, and their religion through the memorization of the Quran, especially after the killing and migration of many Quran memorizers under the reign of the Soviet Union, making the Quran a mere symbol rather than a way of life.

- Who are the students of the Center?

- The center consists of 25 students from Ukrainian, Tatar, and other ethnicities from throughout the country.

Their ages vary from 13-17 years of age. During their three years of studies, we provide them with housing, food, and transportation.

- What are the greatest accomplishments achieved by the Center since its establishment?

- So far, 20 memorizers of the entire Quran have graduated from the Center. 80 memorizers of at least 7 portions of the Quran also graduated, many of which participated in local and international Quran competitions.

As of now, about 120 moderated advocates and Imams have graduated from our Center.

Once the students graduate, we maintain contact with them and their studies, either religious of humanitarian, inside and outside the Ukraine. We want our students to be examples of Islamic personalities.

- What would you like to achieve in the future?

- We hope to establish a memorization center for girls, especially because there is no such establishment in the Ukraine so far. Females tend to be more willing to learn about their religion and memorize the Quran then males. We need to take care of our girls, because they will be future mothers and will have the responsibility of raising a morally conscious Muslim community in the future.

- How do you perceive the state of Islam and Muslims in the Ukraine?

- All thanks are due to Allah. After 20 years of independence and the return of Tatars to their homeland, religious freedom has been preserved for all Ukrainians.

The Islamic renaissance in Ukraine is in constant development. Day by day more and more people are attending prayers. However, what we are trying to do is to direct the Muslims towards the correct understand of their religion, thus establishing a multicultural, multiethnic, and multi-religious society.

- Is there anything you would like to say to the Muslims in Ukraine or Muslims in general?

- I hope that the Ukrainian Muslims would be the best of examples of religious coexistence and the best examples as Muslims.

I would also like to thank all associations and committees aiding Ukrainian Muslims, and I ask Allah to bless their efforts in supporting Muslim Minorities throughout the world.