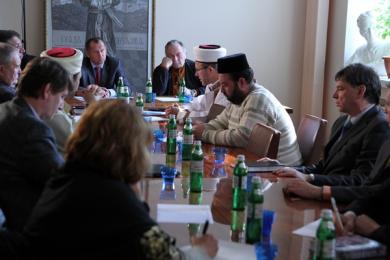 “If we chose the European vector, we have to start moving in that direction instead of sitting and discussing the lacks of the Soviet mentality,” — with this note Mr.Ismail Qady, the deputy Head of AUASO “Alraid”, corrected the discussion within the framework of  an expert roundtable considering Functioning of Islamic Organisations and Institutions in Ukraine and the matters of homeland security, held at the NAS Institute of Philosophy on October 15.  —  “You can’t move on when your head is turned back all the time, and won’t turn to any other directions”, he noted.

Mr.Qady also objected against dividing Muslims to “more worthy and privileged” and “less worthy”,  — this division is hinted at both de-facto in operations of some governing bodies supporting only one religious administration of Muslims and in the replica of some participants.

Necessity of mutual trust and cooperation withiin the current situation were discussed at the event, as many people had to move to other regions within the country and build in in already formed social structure at their new places of residence. Everyone listened to representatives of Crimea and Donbass with a great interest and asked them a lot of questions, as this was the rare opportunity for many of the inhabitants from other regions to hear the information firsthand.

The experts’ work resulted in the expert note containing recommendations for the governing bodies regarding the reaction to peculiarities of functioning of Islamic religious administrations and related social organisations in Ukraine, which they presented on a press-conference on the following day.