Heart To Heart: “Let’s Be Friends Further On!” 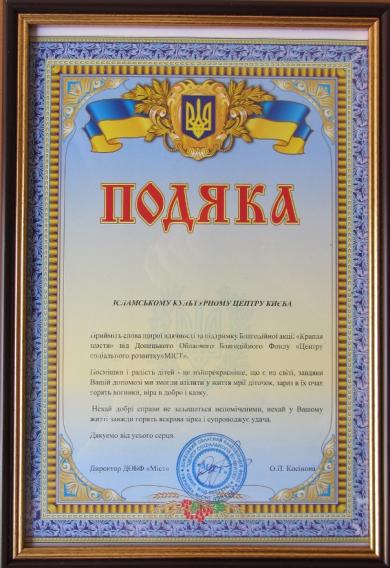 Heart To Heart: “Let’s Be Friends Further On!”

In January 2015 Kyiv Islamic Cultural centre received a thank you letter from Donetsk Regional Charitable Fund “Centre For Social Development “Mist” (Ukr.”Bridge”)” for the input in a charitable initiative “A Drop Of Happiness”. It bears reminding that initiative group of Denets’k citizens along with Social Organisation “Donbass_SOS” in the end of 2014 decided to help the parents of HIV-positive children living in the ATO zone buy presents to make the kids’ holidays happier.

Muslim women from Kiev Women’s Social Organisation “Maryam” were among people who volunteered to help. Having taken the wish-list written by the kids, they went for shopping, often involving their own children in the process. A few days later many bright and colorful gifts were delivered to the “Donbass_SOS” office, and little Muslims often attached handmade postcards where they wished everything best a kid can wish to a kid: good relations with parents, safety for their families, soonest termination of Military actions and many bright and wonderful impressions.

The volunteers successfully delivered the gifts to the ATO zone. And later, successfully passing the area of gunshots and missile explosions that have mercy upon noone, a thank you letter from the project facilitators reached the Kyiv ICC. What’s most important, the envelope also contained hand-made postcards from Donbass children for their new Muslim friends. Message from pure hearts reached other hearts: HIV-positive children could send their new Muslim friends their acknowledgements for the gifts they received. “Thank you for a wonderful gift! I really liked it! May all the bad things be left in this year of 2014, and let peace be in the new year of 2015!”, “Let’s be friends further on!” — further on.

Indeed, kindness has no borders, prejudice, is not limited by time and space. Desire to do good is the great gift the Lord put in our hearts, waiting for us to implement that gift. As Václav Havel once said, “Rescue for the human world lies no other that in human heart...” And human hearts filled with love for God are able to make this world, along with a variety of endless internal human worlds, lighter, kinder and dreamier, despite the horrors of war in which, unfortunately, Ukrainian children have to live.

The thank you letter from Donetsk Regional Charitable Fund “Centre For Social Development “Mist” contains the following words: “Kid’s smile and joy are the most beautiful things of all. Thanks to your help, we could make those kids’ dreams come true. Now there are sparkles in their eyes, along with faith in kindness and fairy-tales.”