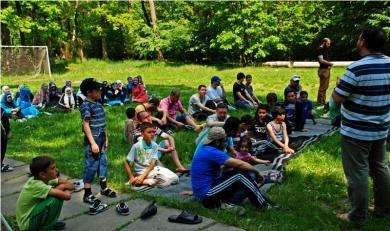 Kyiv Islamic Cultural Centre staff and parishioners arranged an interesting open-air holiday for themselves and their families. More than hundred Muslims came to one of the suburbs together in order to chat, have some rest, play sport games, and at the same time to show rolemodel how one can have fun and spend a holiday with their family without violating the religious rulings.

Activities organizers were awaiting for those who wanted to compete in strength, dexterity and fast footwork. they facilitated interesting quest where the participants had to win hints on each stage in order to learn where the next location was. While five teams, both children and adults, were running around the camp enthusiastically, the volunteers made a meal for everyone — shish-kebabs and pilaw cooked in a huge cauldron on the open fire.

THey didn’t fail to play sports games either, like volleyball and squash; kids also played “got you last”.

A short spiritual reminder took place after the luncheon and the joint prayer, where they spoke of importance of spending as much time as possible with one’s family, and that en famille leisure can and must be pleasant for everyone, ranging from babies to elderly people.

football match was held after some rest, and it was a great joy for the kids, as the teams were mixed; so the little football players were running among the adults with with genuine pleasure and made a convenience of the latter mostly concentrating rather on their desire not to hit the kids of a completely different weight class running around, than the ball.