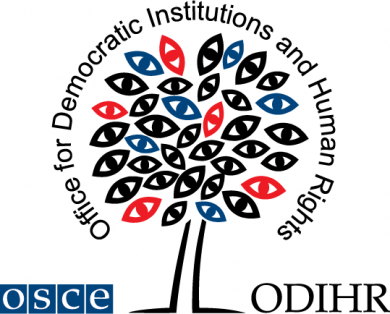 A joint roundtable hosted by OSCE/ODIHR, IOM and UNHCR on improving partnership and communication between the minority communities and the law enforcement agencies took place on December 9. AUASO “Alraid” was represented by Mr.Oleh Guzik, Head of the PR Department, and Mr.Vasyl Bilyk, a lawyer at “Together With The Law” human rights organisation.

They mostly discussed cooperation between the law enforcers and the civil society in preventing and early detecting the hate crimes.

The organisators complained that their links with Muslim communities in Ukraine were weak, so they had fears that some hate crimes against Muslims remain undetected. For instance, there were 6 incidents in 2014, 2 against persons and 4 against property. That was one of the reasons of initiating the roundtable.

Mr.Damir Schneperger from Zagreb (Croatia) Police Academy presented a manual on detecting and responding to the hate crimes, which contained a detailed instruction on how one could distinct those crimes from the other attacks, the consequences of hate crimes, how to react in hate crime situations. The manual also provided the comparative analysis of respective Ukrainian and international legislation.

Ansvering Mr.Guzik’s question, the guest from Croatia told how his country overcame the interconfessional discord and hostilities after the war which in fact lasted for another three years after the cease-fire agreement in 1995. Croatia’s experience gives hope, as the belligerents, despite belonging to different confessions (Orthodox and Catholics) which imprinted religious background on the ethnic conflict, now live side by side peacefully in their common country.