Only the Best Qur’an Reciters are to Represent Ukraine on International Scene: Contest Results Announced 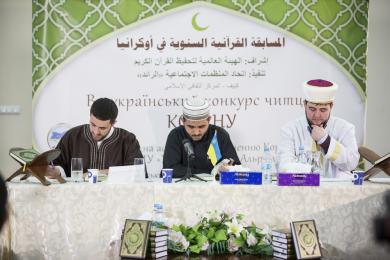 Strict jury at Qur’an recitation contest held at Kyiv ICC on the past weekend made sure Ukraine is to be represented by really worthy candidates. The jury were: Sheikh Haydar al-Hajj, a certified teacher of Qur’an, Sheikh Murat Suleimanov, Imam at Lviv Islamic Cultural Centre and himself a prizewinner at prestigious international contests, and Sheikh Sufian Burmak (France), a representative of Holy Quran Memorization International Organization (HQMIO).

56 participants from all over Ukraine came to try themselves in the contest, one of them from occupied Crimea and another one from occupied territory of Donbass.

One needed not only to be the best among other pretendents, but also to pass the cut score in order to become the prize-winner of the competition, held by Religious Administration of Muslims of Ukraine “Umma” along with All-Ukrainian Association of Social Organisations “Alraid” in close cooperation with the HQMIO. The jury decided they’d better have no winners at certain level at all, than let the underqualified people represent Ukraine at prestigious international Qur’an recitation contests usually held during the Holy Month of Ramadan.

Not only knowledge of the Qur’anic text was estimated, but ability to recite according to tajweed as well. To prevent the participants from questioning the tranquility of point-awarding, Sheikh Haydar explained the rules of winning and losing points before the competition started. There was a little “bonus” as well: when a participant made a mistake and corrected it on their own before the jury interfered, they lost twice less points than in case the jury had to correct them.

Summarising the competition, the prize winners were:

Murat Suleimanov, a jury member, shared his impressions: “To be honest, I was afraid that very little people will participate, for most of the contestants of earlier years were from Crimea, and now most of them were deprived of a possibility to come, for obvious reasons… And I was pleased to see the list of participants; it’s so great that there are more people willing to try themselves each year, and participants from the previous years set themselves higher goals to reach this time.”

Lviv Imam noted that such contests are great opportunities to delve into the air of intense Qur’an memorization, and he would be glad is such competitions were held more often, at least twice a year:

“Of course, provided that this time is enough for the participants to train themselves properly. It’s quite obvious for the jury, which of the contestants did their best and worked hard, and which of them decided they could make it in several weeks’ time before the competition. Listening to those who worked hard has been a pure pleasure.”