Muslims are stars in the “constellation of harmony” » Add new comment

Muslims are stars in the “constellation of harmony” 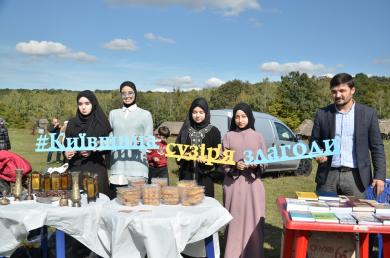 Ukrainian Muslims have traditionally taken part in the hospitable festival “Kyivshchyna - Suzіr’ya zlagody” (“Kyivshchyna is the constellation of harmony”) organised by the Department of Culture, Nationalities, and Religions of Kyiv Oblast State Administration with the assistance of the Ministry of Culture of Ukraine. The co-organizers are the NGO Council of National Communities of Ukraine and the National Museum of Folk Architecture and Folkways of Ukraine, where this event took place on Sunday, September 30.

The festival brought together representatives of 30 national cultural societies, fraternities and diasporas, who demonstrated the distinctive cultural heritage of their peoples. The guests of the event saw performances of creative teams, handicrafts, and tasted the dishes of national cuisines.

Kyiv Islamic Cultural Centre, the RAMU “Ummah”, the Maryam Women's Social Organisation,that is a member of the Alraid All-Ukrainian Association, as well as the students of “Our Future” gymnasium, the Social Organisation “Crimean Family. Qırım ailesi” were Muslim community representatives of Kyiv region.

Mufti RAMU “Ummah” Said Ismagilov welcomed those present at the opening ceremony, noting that such events contributed to interethnic, intercultural and interreligious dialogue - that was what Ukrainian followers of Islam wanted.

Kyiv ICC has held a book exhibition. So visitors had the opportunity to familiarize with the scientific works, particularly on religious studies, as well as with popular science writings on the history of Islam, and books on the history and activities of the “All-Ukrainian Association Alraid”.

The representatives of Social Organisation “Maryam” and students of “Our Future” gymnasium demonstrated Muslim clothing and offered to all those interested in to paint their hands with henna - “mehendi” and to get a master class on it.

The young representatives of the creative bands from the "Crimean Family" impressed the audience with the excellent performance of Crimean Tatar songs and dances.

The Informal Group of Interfaith Peace (IGIP) presented the photo exhibition “Something in common” at the festival. Some of its members communicated with the “Live Library” visitors and took part in the “Be a Human” flash mob initiated by the founder of the association, a public activist and journalist Lyubov Yeremicheva.

Among the participants of IGIP was head of Islamic Culture and History Department at Kyiv ICC, Tariq Sarhan. The book of the "live library" represented by him was very popular among the "readers".