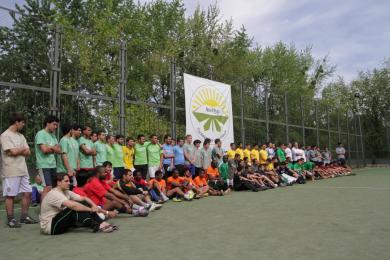 A number of annual mini-football competitions were held during the whole month of May in the cities of Ukraine. AUASO “Alraid” tempts the youth to healthy and sporty life by organizing competitions in different sports.

Football Cup in Vinnitsya was launched as far back as in April and lasted for two weeks. Eight teams mostly consisting of students of Arab origin competed for the “Al-Israa” Cup and valuable prizes. Besides that, members of the finalist teams were awarded with medals.

Best players of the competition were also rewarded.

Deya Abu-Theyne, head of “Al-Israa” NGO, thanked each and every participant   and wished them further success and achievements.

The 16th annual competition took place in Kyiv on May, 10-11. This year 15 teams consisting young people of different ethnic origins (Syrians, Crimean Tatars, Cypriots, Tunisians, Moroccans, Libyans, Chechens, Sudanese, Turks, Iraqi and Saudis) were formed mainly by the criteria of a native country. People lacking enough fellows of the same ethnicity to make a separate team could join any team by mutual agreement. There even was a fully international team.

Besides that, the Saudi team was awarded with a special cup as the most disciplined one, and Asem Ash-Shreef was recognized as the top scorer.

The All-Crimean Competition for “Emel” Cup

Meanwhile the fourth annual republic-wide mini-football Cup was held at the Crimean peninsula. Youth teams from different Universities and districts competed for the “Emel” NGO Cup.

All prize-winners received money rewards from the provider.