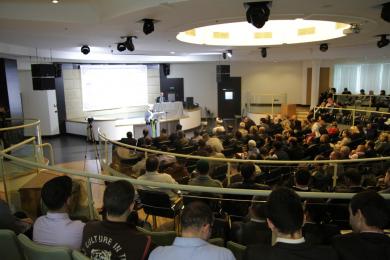 III International Research and Practice Conference “Al-Wasatiyyah Principle In Islam” with pivotal discussion on Al-Wasatiyyah principle on the agenda took place on September, 19. The event consisting of plenary meeting and a roundtable discussion was initiated by AUASO “Alraid”, RAMU “”Umma”  and Centre for Religious Research And International Spiritual Relations.

“The Al-Wasatiyyah principle is the subject of discussion at the Conference, and this topic is a question of present interest in the context of transformation in modern Islamic world and Global community. Moderate Islam is a path to developing dialogue, peace and understanding. It involves listening and understanding other points of view, but sticking firmly to our values at the same time. In their works the researchers offer their view on the processes going on in Islam” (“Al-Qalam”, #2).

Every participant received their copies of the second issue of “Al-Qalam” (collection of scientific articles) containing participants’ reports, and also some informational brochures, during registration.

Mr. Igor Kozlovskiy (President of Centre for Religious Research And International Spiritual Relations) was bothe the narrator during the plenary session and moderator during the round table. He believes that the believers make more efforts for maintaining dialogue with secular society, as “... this society  mainly lost their values; at the same time, Islam offers values and show how they can transform a human being living in the modern world to a better person.”

He stressed that Islam by no means stands for smackdown and has no intention to “bring everybody back to the Medieval”, on the contrary, “Islam enriched the world civilization so greatly that the critics just have to hush up. We have to be more courageous, which will lead to enlightening every member of modern globalized society. Islam has to become mainstream not only in Islamic History, but also in the World History which will lead us to a more balanced global society.”

After a short break after the session a round table started with a challenging topic “Al-Wasatiyyah principle in Islam, theory and practice”.

Compliments by Donetsk City Mayor Alexander Lukianenko resonated with the event’s main issue. He expressed high expectations and a great deal of trust the local authorities rut in this research event: “this Conference is the evidence maintaining heart-warming tradition, strengthening moral and spiritual basis and the spirit of mutual understanding and support.” He specified that “jet we need to give much time and efforts to promote moderation, tolerance and latitude in religion as attributes of each and every person.”