Muftis Of The Post-Soviet Area On Moderation Principle In Islam 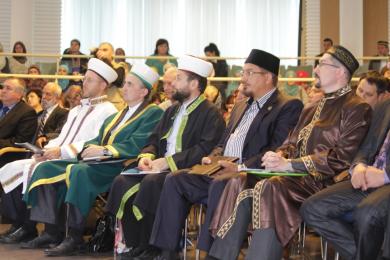 Muftis Of The Post-Soviet Area On Moderation Principle In Islam

III International Research and Practice Conference “Al-Wasatiyyah Principle In Islam” initiated by AUASO “Alraid”, RAMU “”Umma”  and Centre for Religious Research And International Spiritual Relations took place on September, 19. The event had a pivotal discussion on Al-Wasatiyyah principle in Islam on the agenda.

Muftis of some of the post-Soviet countries’ religious administrations covered this issue in their reports and complimentary speeches.

“Al-Wasatiyyah is one of the basic principles of Islam and it means moderation, balance, denying the extremities and radicalism.

The wasatiyyah phenomenon isn’t something new in Islam; moreover, it resides in Islamic tradition from the times of the Prophet Muhammad, peace and blessings be upon him, and was first used as a Shariah term in the verses of the Holy Qur’an. Allah Almighty gives the following qualification of Islamic Ummah: “And thus we have made you a just (moderate) community that you will be witnesses over the people and the Messenger will be a witness over you.” (Qur’an, 2:143). Please note that the Almighty doesn’t even command here, He’s just stating the fact that Muslims are a community of balance and moderation. So being a Muslim already means to be moderated and put it out of the question, as Allah himself has made us carriers of that trait. Due to the verse above, every extremity, intemperance or radicalism in a loose sense of those terms is out of the Muslim character both in personal and public levels.”

Moderation is a hot topic nowadays, as most Muslims both in the Post-Soviet area and Europe lack understanding in so-called “in-situ Fiqh”. Wasatiyyah, or moderation, brings us back to Islamic true teaching and helps us solve many problems modern Muslims deal with.”

Rawil Ğaynetdin, Head Of The Council of Muftis of Russia, Head Of Religious Administration Of Muslims Of European Part Of Russia

“Islam was a religion of moderation from the first days of the Propher’s mission, and so it remains. Every Muslim must always aim for balance, moderation and harmony. Prophet Muhammad, peace and blessings be upon him, repeatedly said that Islam is a religion of “the golden mean” and forbade exorbitance. He reportedly said: "O you people, beware of being extreme and exceeding the limits in the religion, for that which destroyed the people before you was none other than extremism in the religion." In our preachings we always tell our parishioners that Prophet Muhammad’s life and actions are the best example and guidance for Muslims.

Moreover, we think every Muslim must be all-round person in order to build a society where the religion and morals are balanced with science, education, culture and social relations.”

Ali Voronovich, Mufti of Religious Administration of Muslims in Belarus

“The subject of the conference, i.e. moderation in Islam, is a topical issue. It is also a matter of great importance for us, Muslims of Belarus, as we are a multi-ethnic community. And  tolerance, for each other, for different opinion and different religions are the main signs of moderation.

It’s moderation, the basic principle of Islam and it’s integral part, that keeps peace and good neighbourhood in the society. It’s very important that we all not only understand that, but act like that in our everyday life, showing people of other religions our love and respect for them. Everyday practice is the point that ensures interfaith harmony and welfarism of the society.”