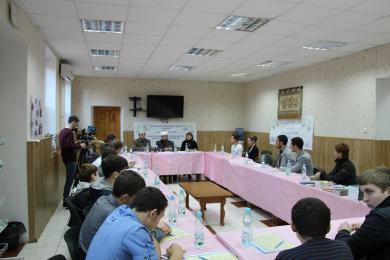 Many events for the youth have the same problem: the actual youth  have the passive role of spectators and listeners, while lecturers, at the best case five to ten years older, share their own views of the young people’s problems and expectations. Their views and experiences, of course, differ greatly. The lack of knowledge of peculiarities and circumstances of the youth's everyday life leads to situation where the lecturer is simply unable to come up with adequate solutions. This is the main reasons why many things spoken at such events remain just talking.

It was for the first time that the that the students of high school and higher educational institutions of different ethnic and religious origin gathered at a roundtable at the “Al-Masar” Islamic Cultural Centre to speak for themselves and tell if they have problems in intercultural and interfaith communication.

The attendees eagerly jumped into conversation and it was a very short time until they started discussing burning issues, introducing themselves along the way and getting rid of prejudice they managed to attain even at their young age. They also raised another critical topic of violence among teenagers regardless their roots and even tried to work out some methods to help overcoming this problem.

Not Just To Check The Box

People, regardless of their age, intussuscept something back to the drawing board more eagerly if this rediscovery is not attended with tence, but is surrounded by an easy friendly atmosphere. “Our acquaintance started with a dialogue, and I’d be happy if our contacts became regular as the time passes, and even grown to friendship,” — Mr. Zeitullaev summarized.

Similar events are soon to be held in other Ukrainian cities, namely Kyiv, Kharkiv and Donetsk. The facilitators hope that young people in other cities will be interested as well, because it’s very important for everybody to have some place where you can discuss  problems and situation of your current concert with people who have the same problems and questions; to share experiences and see the problems from other people’s point of view.