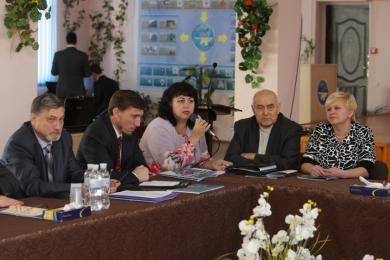 A scientific conference on Interethnic and Interfaith Relations in Crimea, organized by the National Academy Of Science of Ukraine Institute Of Oriental Studies and AUASO “Alraid”,  took place at the Islamic Cultural Centre of Simferopol.

Deputy of Crimean Parliament Mr.Valerii Kosarev, Deputy Minister for Education, Youth And Sports Ms. Lenara Selendili, President of Crimean Engineering And Teacher’s University Mr. Fevzi Yakubov, representatives of Religious Administration of Muslims of Crimea, educators and graduate students from different Universities of the peninsula were the special guests at the event. The guests’ complimentary words contained mentioning the importance of discussing such topic in Crimea as one of the most multinationale regions of Ukraine.

“Today our researchers, facilitated by the AUASO”Alraid”, do a very important job, and it’d be good if the society, namely youth, learned about the conference,” – Mr. Kosarev noted.

According to Mr. Fevzi Yakubov, it’s very reassuring that Crimean researchers gather to discuss the perspectives and creates step by step solutions to be implemented in the nearest future for developing peace and understanding.

The conference level increases year to year, which is proved by the fact that most of the 40 reports presented at the conference were made by PhD’s and Grand PHD’s; the participants themselves found this fact notable. Another advantage is that the event covered different spheres, including politology, history, geography, religious studies, etc.

Not every report had been presented, as each each speech was followed by numerous questions and debates.

A Digest containing all reports is to be issued in the nearest future. The facilitators say such Digests are reclaimed both among the Crimean and Ukrainian researchers.

Harmonizing interethnic and interfaith relation has been a field of AUASO “Alraid” concern for a long time already, so the tradition of holding such events for popularizing tolerance and understanding will last in the future.