Everyone Can Sugar-Coat An Orphan’s Bitter Childhood 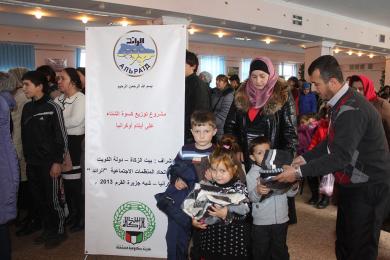 Everyone Can Sugar-Coat An Orphan’s Bitter Childhood

It is well known that Islamic conception of orphanhood is a little different from that is common in Post-Soviet countries. Not only children deprived of both parents are considered orphans, but also those who lost their father, the supporter of the family, for some reason. Sometimes custody of two or three children is burdensome on the mother of the family, and most people can’t even imagine how these mothers struggle every day to earn food, clothing and roof over their children’s heads. The elderly people, who lost their children and now take care of their grandchildren are, of course  , in the hardest situation, as most of them can’t work because of the age and poor health, and their scanty pension isn’t enough even to provide enough food for the children, not to mention meeting their other needs.

We met many of these people at the Islamic Cultural Centre of Simferopol at the quarterly benefit payments for orphans deprived of paternal care due to various wear and tear of life. Those underage children are among orphans in the AUASO “Alraid”’s ward. The guardians from throughout the Crimean peninsula come for material aid which is to facilitate their burden of raising and maintaining an orphaned child. As there are 2300 such orphans, the payment days were scheduled for two weekends; the next stage is to be held on December 21-22.

Due to the cold season the children also received warm coats, hats and footwear.

Artur And Safiye are twins of 8. Rustem-aga, their grandfather, shared his worries: “A grave illness took away my son. Of cource, the life became more difficult after we lost the supporter of the family; everyone tries hard to save at least some money to spent at least some more on the children’s needs. Thank God people kind and fair are everywhere and AUASO “Alraid” has been supporting us for 4 years already. Now our kids have novelties, and this is a huge relief for our family budget. Good luck to you in this charitable deed!”

The children have loving memory of their father: “Our dad died several years ago, but I often remember him. I want to grow up and join the army. I’ll be big and strong, so I can take care of my family and protect them,” - Arthur says.

16-year-old Reshat is less lucky: he doesn’t even remember his father/ “My dad left us… I don’t even remember him now. You know, I want to grow up and be a wothy man. And one day my father and I would walk down the streets holding hands, and we would be happy. I want him to be proud of me.”

Mother of 12-year-old Arzu tried hard to hide her weariness and worries from her daughter, but she failed: “My greatest wish is that my mom was happy and always smiling. I’ll grow up and become an interpreter of Turkish, and she won’t have to work so much any more. I want to have a big and close-knit family!”

“A disaster came to our home: I have to take care not  only of my three little children, but also of a sister who is losing her battle with cancer, and my 80-year-old mother. We buried our father a while ago. I can’t get a full-time job — who takes care of my dearest, then, if I’m not at home most of the day? It’s been 2 years already since I started receiving financial help from “Alraid”. I don’t know what I would do if not given this help,” — says 38-year-old Zarema from Eupatoria.

70-years-old Ms. Lidia Asmanova from Krasnoperekopsk has a tough time as well: “I have two grandchildren, Feride and Kamuran. My son died 11 years ago, my daughter-in-law is in Moscow — so I raise the children alone. It’s been 10 years already since I started receiving help from “Alraid”/ and each time they try to give something more than money. I’m hurrying home now to make the kids’ day with novelties, we have a little special day today.”

Ms. Zarema Ibrahimova from Simferopol, aged 30, got widowed with two little children in her custody: “I have two children aged 9 and 6. My husband died barely having seen the newborn younger kid, so I raise them alone. Your help is invaluable, thank you very much!”

The programme of quarterly benefit payments for orphans is just a part of amplitudinous work the “Alraid Team” does in searching sponsors for poor Crimean Tatar families and orphans through public charity funds.

We have 2300 orphans in ward at present, and this number increases for another 100 each year. Guardians seeking sponsorship provide the Association with listed documents and wait for us to find a sponsor in one of the Muslim countries for the orphan the guardian is raising. The response, however, can be negative, and each guardian is warned of that possibility in advance.

Besides financial aid, we provide other types of assistance for orphans: we invite them for interesting excursions and recreational events, organize and hold  Annual Summer Camps, festive concerts, etc.