Islam Doesn’t Deny Democracy, Which Is One Of Its Principles 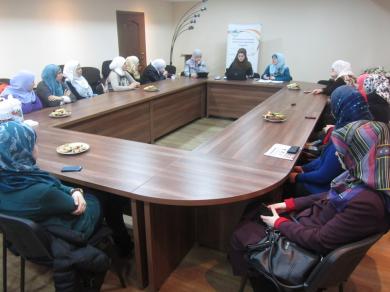 Islam Doesn’t Deny Democracy, Which Is One Of Its Principles

A one-minute silence in honour of those fallen for freedom of Ukraine and reciting the Holy Qur’an marked  the opening of the roundtable “Islam and Democracy”, facilitated by the Female Social Organisation “Maryam” at Kyiv Islamic Cultural Centre. A revolution occurred in the Ukrainian society, which gives us hope that everybody’s life will change for the better and the Ukrainians of all ethnic and religious groups gained first raylets of democracy.

The participants wanted to understand the role of Ukrainian Muslims in the political process, and how to guarantee that the corrupt practice will not be renewed?

The Holy Qur’an tells the believers to consult when carrying out important decisions concerning the whole community. This principle is enacted through electing leaders of the community to rule it and made decisions: “ ... and consult them in the matter. And when you have decided, then rely upon Allah… Qur’an (3:159); “But what is with Allah is better and more lasting for those who have believed and upon their Lord rely … and whose affair is [determined by] consultation among themselves, and from what We have provided them, they spend” (42:36,38).

The first election was initiated by Prophet Muhammad (peace and blessings be upon him) himself, when he, in his deathbed, refused to name his successor so that the people could choose a leader on their own.

The participants came to a conclusion that Ukrainian Muslims not only can, but rather must take part in the processes of developing the Ukrainian society and state government, trying their best to bring more honesty, justice and openness for the sake of everyone.

We have to change ourselves first if we want to change the world. Not only the similitudes and morality tales teach this, but the Lord Himself tells this in the verses of Qur’an.