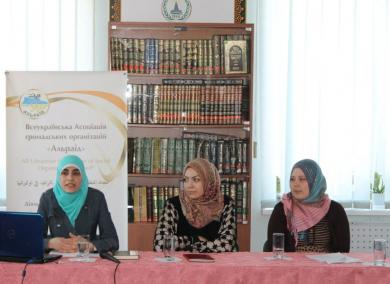 Both Muslims and non-Muslims were equally interested in listening to the reports at a traditional spring women’s conference held at Kharkiv Islamic Cultural Centre on April 6. Lofty matters, such as the impact the faith in God has on human society, were on discussion. Female believers of other religions at the same time got a possibility to take a different look at Islam, knowledge of which among non-Muslims are mostly limited to a small number of cliches. Besides, the guests learned about the Social Organisation’s “Al-Manar” Women’s Club, which eagerly welcomes everyone regardless of their faith.

Lecturers of the “Al-Manar”, namely Ms. Olha Kots, Ms.Elvira Ismailova And Ms.Hamidah Taher, developed the theme in complex, from the bases of Islam and to necessity of cultivate faith in our souls.

Faith is initiated in every human being from the very first day of their life. When growing up, everybody makes a choice of their own attitude to this congenital feeling. Some people take this as a natural feeling of a creation towards the Creator; some people try to find explanations in occultism, spiritualism, different philosophical concepts; some turn to science as an alternative only to assure themselves there has to be a Creator of all this once they succeed in their studies.

A believer will never be pretentious or overconfident. There’s no place for pride for his power or wealth in his heart; Qur’an and Sunnah constantly remind that all the wealth of the Earth is Granted only by the God and can fade as easily as they came. God Almighty warns people over His Prophet, peace and blessings be upon him, and calls them to draw lessons from the biographies of famous arrogant men among high and mighties.

The guests highly appreciated the fourchette the facilitators arranged after the Conference was over; here they could share their impressions and make new acquaintances.