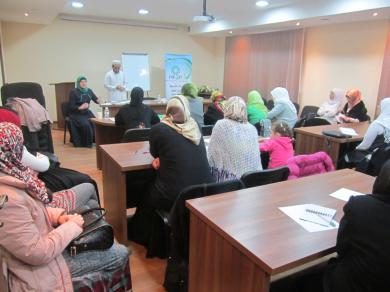 Two seminars for women rolled into one day of Sunday, April 13, at two “Alraid‘ Islamic Cultural Centres, namely in Kyiv and in Vinnitsa.

Seminar in Vinnitsa was meant for new Muslims, meanwhile in Kyiv techniques of learning the Holy Qur’an and the structure of the human memory were on discussion.

New Muslims often feel isolated; as a rule, there are no or just a few practicing Muslims among their contacts and there’s simply no one to answer their questions. For that reason the Association holds such seminars when necessary; this time more than 40 people came to the “Al-Isra” ICC.

Mr. Tariq Sarhan, Head of the AUASO “Alraid” Islamic Culture Department, first of all stressed a serious mistake some of the new Muslims make: they become estranged from non-Muslim relatives.

This, however, is the contrary to what Islam really teaches. Islam promotes maintaining family ties even with pagans and atheists, and orders to treat them in a good manner. And, of course, this is subject to the “People of the Book”, namely Jews and Christians.

Mr.Sarhan also spoke about aesthetics in Islam and gave some advice of conduct in some typical situations when something is against the person’s religious beliefs — how to get out of such situation and not hurt anybody’s feelings.

At the very same time Shaikh Haider Muhammad Al-Hajj, teacher of Qur’an and Shariah studies who knows all the 10 types of reading the holy Book, gave an interesting insight in studying the Qur’an at Kyiv Islamic Cultural Centre.

More than three dozen women came to listen about the structure of a human memory and means of developing it. After that the Shaikh told about the importance of learning Qur’an and passing your knowledge to other people. And, of course, he described the methods of learning Qur’an for non-Arabic speakers.

Shaikh Haider warned against incogitant overlearning of Arabic text; instead, he strongly recommended to read translations of every ayah after one read the original text. This not only makes the process comprehending, but also fosters better remembering. For more effective overlearning he recommended to combine reading and listening, and, of course, to practice daily.

Mr. Al-Hajj described widespread mistakes while reading and described the factors that detain effective study — any study at all.