Teach Your Children Self-Reliance, And Don’t Fear To Let Them Socialize 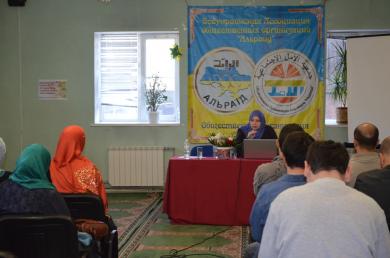 “On Our Children And More” — such title could not fit better to all the topics covered by a family seminar held at Donetsk Islamic Cultural Centre on April 27. The event had been facilitated by the Female Department of the AUASO “Alraid” Donbass Branch.

Labour and postpartum period were discussed at two angles at once. Ms. Yumna SharAbaty, obstetrics and gynecology doctor, spoke about the physical health, newborn pediatric hygiene, biology of postnatal depression, breastfeeding and girls hygiene. Mr. Refat Sabitov, a Family Relationships expert, told about the psychological aspects of joint labour. He also drew parents’ attention to the importance of treating the children and their point of view with dignity and respect as soon as they start having one.

Mr. Sabitov stressed that the parents will have less fear of letting their children socialize (sending them to kindergarden, school, etc.), if the children catch up piety from their parents, and, of course, learn how to make decisions and  stand on their own point. According to their age, of course: a four-year old is one hundred percent capable of choosing which sweater they wear today, with a car or with a giraffe.

Mr. Refat Sabitov devoted a separate lecture to the issues of paternal personal pattern. He told that the children are very likely to imitate the patterns of their parents’ behaviour, both in family and in society. This is the source where the little ones pick models of relations with the opposite sex when growing up. Of course, those models are corrected by personal experience apart from the parents, observations,  cuts and tries, inner turmoil and rethinking while maturing. But if moms and dads want to give their child a good start, they have to take a closer look at themselves.

Ms. Tanzilya Isa, the psychologist, devoted her lecture to broken families. She spoke about divorce and how hard this situation is for a child; gave some advice on making it easier and less traumatic for the offspring. Besides, the psychologist mentioned methods of pedagogic affecting on children that help improve their behaviour without hurting them.