Lack Of Knowledge Isn’t Shameful, While Lack Of Interest To Ask Is 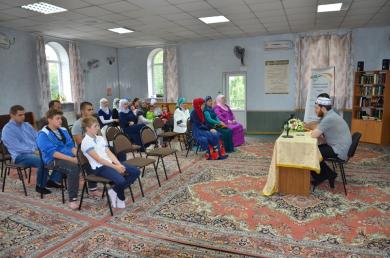 Due to the forthcoming Holy Month of Ramadan “Alraid” Islamic Cultural Centres traditionally facilitate educational seminars where anyone can listen to lectures on the rulings of fasting and ask questions on disturbing matters of these rules’ practical use. Such events are informative for both the new Muslims and those whose circumstances changed and they don’t know how to fast in their current situation. At the same time, they are informative for those powered by the curiosity and willing to develop a better understanding of their Muslim compatriots. Such seminars were held in Vinnitsa, Odessa and Zaporizhzhya last week. Today similar event is to be held at Kyiv ICC after the Friday prayer.

About 25 people gathered at Islamic Cultural Centre of Vinnitsa in order to learn more about the Holy Month. The Centre’s special guest from Kyiv Shaikh Rasim Dervishev spoke about both the accomplishments of Ramadan and the reward a believer can win by zealous worshiping during this month. He also gave some historical background of events prominent for Muslim Civilisation that occurred during Ramadan over the past centuries.

Place of this seminar determined the specific questions on fasting people asked the lecturer, Mr.Bilal Hamza. They asked, for instance, if a sailor man is considered as a traveller and, consequently, if he can postpone fasting or not.

Before the interactive part began, three dozens guests at Odessa ICC listened to lectures on accomplishments of Ramadan, rulings of fasting, and also permitted and prohibited actions during this month. In particular, he gave a detailed explanation of postponing the fast for those who have reasonable excuse and its compensation if the person is unable to fast at all because of the poor health.

Visitors of Zaporizhzhya ICC also learned the historical background of events occurred during Ramadan over the past centuries. Mr.Muhammad Mamutov, the local ICC Mosque Imam, spoke about the accomplishments of Ramadan and Muslims’ attitude towards it, and the Centre’s special guests from Kharkiv, Mr. Shadi Othman and Rm. Evhen Glushchenko spoke about permitted and prohibited actions and the historical background respectively.