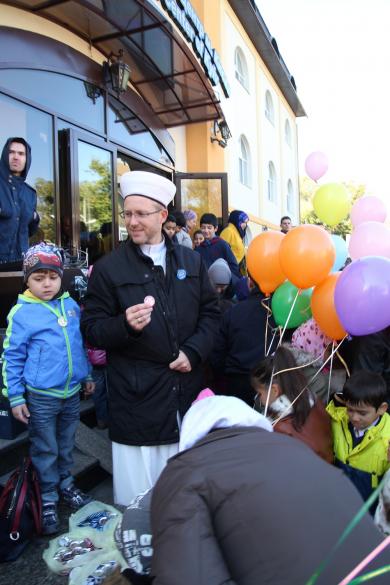 Today, on October 4, Muslims worldwide celebrate one of the greatest Islamic feasts, which is Eid al-Adha (Qurban-Bayram). Having begun their day with a festive prayer followed by khutbah (the preaching), every community tries to facilitate some additional events to help everyone achieve the festive mood and feel that this day is indeed special. “Alraid” Islamic Cultural Centres traditionally hold events for both adults and children.

More than 2,500 believers attended the Kyiv ICC mosque in order to perform the festive prayer and listen to khutbah. After that, everyone was invited to have a treat (pies with meat, sweet bakery, tea and juice). The children jumped all over the bouncy castle and stood in line get a cotton candy.

At 11 AM the little Muslims were invited to attend the festive concert at the second floor of the men’s hall of the mosque where they could not only do some acting in front of their relatives and friends, but also see the performance of the animators and play with the clowns. And, of course, every little parishioner got a toy as a gift. Teenagers were presented with Islamic-patterned badges that can be worn on either clothes or bags.

Slaughtering the sacrificial animals at a farm in Kyiv suburb will start in the afternoon. Tomorrow morning, since 11AM,  the RAMU “Umma” volunteers will be waiting for the needy Muslims of Kyiv in a special RAMU “Umma” tent in the Kyiv ICC yard. People who are too weak to come and those resettled from Crimea and Donbass will have their meat delivered to the places of their residence.

For the Muslims of L’viv, the feast will continue tomorrow as well, as the local community and the Crimean Tatar community facilitate a children’s event at an entertainment centre, where there will be bouncy castles, games with animators and other things that give the kids the true joy.

More than 700 poeple attended the local ICC mosque this morning in order to perform a joint festive prayer. After the khutbah, they have been invited for treats: muffins, cookies, sweets, tea and juice. The children played with the animators and jumped all over the bouncy castle. Besides, a festive concert is awaiting of them at the ICC mosque after the prayer of Asr.