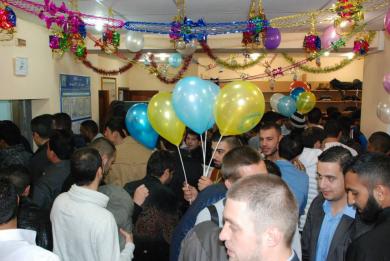 Despite the  fact that the surroundings of the Luhansk Cathedral mosque are dotted with missiles and the building’s windows were all broken by the explosive blast, the place for prayers wasn’t abandoned by the parishioners on the festive day of Eid al-Adha. Of course, those one and half dozen of people would be lost in a crowd celebrating Eid in the mosque yard in its palmy days,but such devotion means a lot on these days. The people left for their safe places quietly after the prayer was over, but still each of them took a decision to take a risk and attend the prayer in order to feel the spirit of the feast.

The city of Kharkiv, on the contrary, experienced a rush on the morning of October 4, as more people came for the prayer than not only the local ICC mosque, but the building itself could accomodate. Praying people occupied classes, corridors, library and even staircases. After the Khutbah, while the adults congratulated each other, the children received presents.

Soon after that, many men went to perform the sacrifice and brought the meat to the ICC in order to give it away to the needy people of Kharkiv.

A festive concert at the Students’ Palace Hall was held in the evening, opened with the recitation of the Holy Qur’an and the joint rendering of the Ukrainian Anthem. Not only the adepts of Islam came, but also people of other religions who either wanted to congratulate their Muslim friends or were just curious. Islamic Literature fair was held along the concert.

More than 400 people were treated and entertained after the festive prayer at the ICC of Vinnitsya. The children had their ovn party: they were entertained by animators, who involved them into interesting games and contests.

While the men were busy with sacrificial animals after the festive prayer, and with distributing it to the poor and forcefully resettled people on the following day, women and children continued celebrating on Sunday. There was a special programme for them with a banquet, quizzes, games and gifts.

Several hundred people, who attended the festive prayer, were invited for the treats after it. The animals were slaughtered on the following day, and the meat was distributed on Monday and Tuesday.