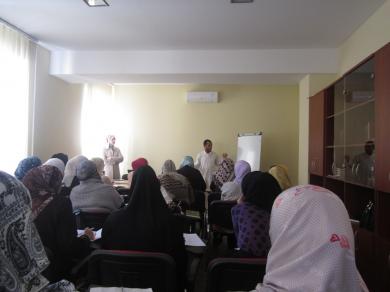 Shaikh Haydar Al-Hajj and his students turned their fair day off into a full working day last Saturday, as the seminar on revealing the most common mistakes in reading the Qur’an began at 10AM and ended after the Maghrib prayer (5PM).

The Shaikh had a good reason to facilitate the seminar: being a teacher of QUr’an and Tajweed at Kyiv Islamic Cultural Centre, he constantly noticed the same mistakes made by his students of both sexes, and corrected them every time, — just to confirm his opinion that without ground base only a few people really remember their mistakes and try to avoid them in the future. He dedicated first three hours of his seminar to pronunciation of Arabic letters, as making a muddle of the sounds or even stress marks can change the whole meaning of the words in any language, and Arabic is no exception.

The group proceeded after the lunch: the teacher explained the basic rules of recitation and offered three suras containing the biggest number of examples for those rules for practice.

After the students learned how to implement those rules quite well, the new text was given to them so they had to search for the new examples of the rules on their own.

The day ended with an examination over the material learned. The teacher wrote the mistakes made by each of the student on a separate piece of paper and gave his recommendation on getting rid of those mistakes. The further work will be held within the framework of the regular Qur’an classes according to the schedule; there are, however, some similar seminars planned for the nearest future in order to workout groups of rules not covered by the first event.