“Jesus And Muhammad: Brothers In Faith” 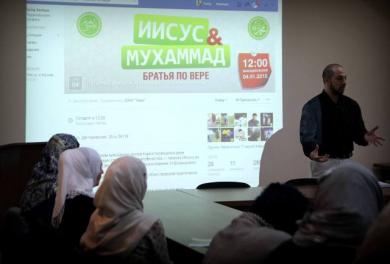 “Jesus And Muhammad: Brothers In Faith”

Maulid of Prophet Muhammad, celebrated by Muslims worldwide, and Christmas praised by the Christians of different denomination occurred as near as no matter this year. This happens once every 33 years, and, of course, Kyiv Muslims couldn’t miss such an opportunity to dispel the myth popular among non-Muslims, stating that followers of Prophet Muhammad, peace and blessings be upon him, feel scorn for Jesus. This was the central topic of the event held at Kyiv islamic cultural Centre last Sunday.

In reality things are completely different: Jesus is one of the praised Prophets and Messengers of God, entrusted by Him to bring the Holy Scripture to the people.

“History of Islam begins long before Muhammad’s prophecy mission started, and even long before he was born.It started with the first man on Earth, Prophet Adam,” — Tariq Sarhan, Head of the Centre’s Islamic Culture Department, says.

Every prophet preached identical basis of faith, and this message was repeated over and over. The basis of practice is what differed, as each prophet accentuated on correcting the most common faults of the society he was sent to.

The difference between the attitude of muslims and Christians to this historical figure is that Muslims honour Jesus as God’s prophet, without without investing him with divinity. If you understand Russian and want to learn reasons for that, please follow the link to hear the whole lecture on the Kyiv ICC’s YouTube Channel.