“Protestants Provided Kids With Lunch, Muslims Fed Them With Supper” 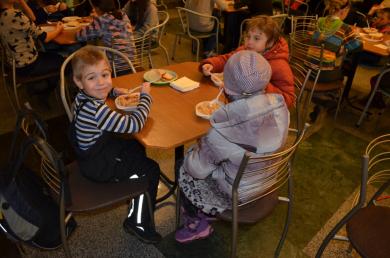 “Protestants Provided Kids With Lunch, Muslims Fed Them With Supper”

In the evening of January 15 Imams and activists of Kharkiv Islamic Cultural Centre went to the logistics assistance office “Station “Kharkiv” in order to treat the kids from the ATO zone with pilaw.

A week earlier, they learned that the group of 27 kids of different age and their accompanying volunteers will be on a stopover in the city Southern Railway station. The Muslims decided to demonstrate Islamic hospitality and feed them with hot meals in order to make their waiting for the transfer a little warmer and nicer. They chose pilaw, a tasty and heavy Central Asian dish, which is very popular in Ukraine.

According to the volunteers, the children were on recreation in one of the camps of the Lviv region, and visited the city as well. Ms.Alla Feshchenko, a Station “Kharkiv” activist, thanked for the tasty supper: “It’s really nice that the religious communities of Kharkiv showed some thought and care for our little pupils. Protestants provided the kids with lunch, and Muslims fed them with supper — and this is so great!”

Muslims were pleasantly surprised to see the children start their meal with a joint prayer in which they also mentioned people who cooked and brought the pilaw. The  logistics assistance office staff, on their part, handed over some sweets for little Muslims.