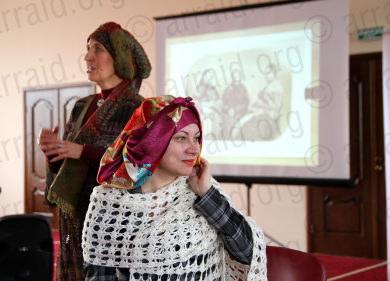 More than 80 women and young ladies of different religions came to Islamic Cultural Centre yesterday in order to take part in a master-class dedicated to the World’s Hijab Day. The master-class was a duplex one: invited by the Women’s Social Organisation “Maryam” Ms Oksana Kosmina, a historian of Ukrainian costume and material culture, spoke about the particularities on women’s headwear in the regions of Kyiv, Polissya, Gutsulshchina, Lemkivshchina and Pokuttya, and Ms.Rayana Volha Chernykh, a journalist who travelled a lot through Middle East and Northern Africa where she picked up some hijab styles from the local women.

The costume historian told that besides the widely promoted image of a woman in a kerchief that doesn’t cover the neck (which is actually a later version of covering one’s head), the history of Ukrainian costume presents a lot of alterations of women’s headwear styles that completely fulfill the requirements of Shariah. The historian didn’t just speak, but showed some illustrations along the story and then demonstrated the garments she described, draping them on everyone willing. Ancient “ochipok” (traditional head dress of married women) became the icing on the event’s cake — though the colours of the fabric slightly faded with time, it still hasn’t lost its copious look.

Ms.Cosmina herself couldn’t resist to do the latter: she approached the matter scientifically and decided to learn more about headware in different cultures.

Girls and women attending the master-lass brought along their own kerchiefs and headscarves, so many of them left it draped by the masters. Besides a chance of trying on a new look, the guests got new acquaintances, interesting chatting and a sweet buffet. As reflected by their buoyancy, all the listed above gave the guests a lot of positive emotions.