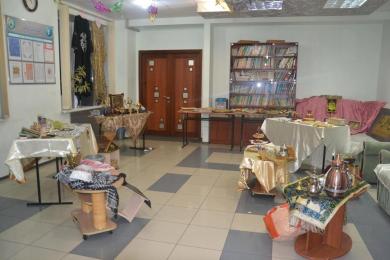 Arab women, frequent visitors at the Islamic Cultural Centre of Kharkiv, decided to make a presentation of their national cultures for their ukrainian sisters in faith. Women of Moroccan, Syrian, Jordanian, Tunisian, Iraqi and Palestinian origin greeted the guests with Arabic coffee, dates and milk.

The air of an Arabic home was recreated with the help of fitment brought by the facilitators. such as coffee-jars, jezve, book stands, vases, chandeliers, cassolettes, paintings and napkin holders. besides, the traditional elements of setting were present on a table where traditional dishes of Arabic cuisine were awaiting for the guests.

Each of the women made a presentation about her Fatherland, it’s national culture and traditional cuisine, followed by a slide-show.

Narrative on traditional Moroccan wedding was followed by a screenplay, which caught the audience.

After watching a presentational video about the Arab women’s club at the ICC the guests were announced dinner, so that they could taste the dishes described to them just recently. Much attention was paid to desserts, so there was plenty of Arabic sweets. The guests liked the themed party so much that it lasted until late in the evening.

We believe that this was a backlash of the Arab women for their Ukrainian sisters in faith, as the last similar event was vice versa — Ukrainians fed the Arabs with traditional Ukrainian dishes.