“Fathers And Sons”: Religion And Psychology 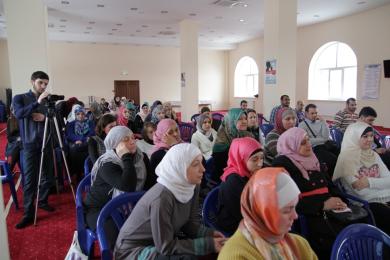 “Fathers And Sons”: Religion And Psychology

Both Prophet Muhammad, peace and blessings be upon him, and modern psychologists agree that it’s preferable to educate children while playing until they reach the age of 7.

In fact, not a single prophetic advice in pedagogics was rejected by the children’s psychologists, and the visitors of kyiv Islamic Cultural Centre could see that for themselves at a seminar-training. This event covered both spiritual and laic aspects of breeding, conducted by Shailh Haydar Al-Hajj, the local Imam, and Ms. Yana Omel’chenko, the psychologist.

Complementing each other, they spoke about the wide range of issues, such as age peculiarities, spiritual education from the very cradle, possible problems of prepubescent years, etc. They also gave a thorough analysis of the matter, what is normal for certain age and what is a problem.

The trainers drew the parent’s attention to the fact that child’s development at any age should be balanced: their bodies need constant exercise as well as their intellect. Many modern parents, unfortunately, prefer to leave the child in sitting at a TV/computer all day long, which certainly harms both their physical and psychological health.

Many parents asked questions about what games can one play with a child so that it would be interesting for both kids and their parents, and what games can be both developing and funny? The psychologist stressed that playing with children will make use anyway is the parents are fully involved, as this helps to establish and maintain direct contact with the offsprings. As the matter needed more time than one seminar could accommodate, the facilitators proposed to cover the developing games in a separate event.