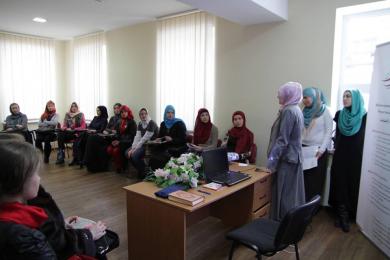 Did you ever wonder how the life of a woman who decided to become a practicing Muslim changes? Does the wider public demonstrate a different attitude towards the woman who decided to cover up? How can one behave in case of possible misunderstanding? How one can softly  persuade their partner in conversation that thethe pattern they are trying to rush you in is nothing more that someone’s speculations and fantasies? More than three dozen of women accepted invitation from Women’s Social Organisation “Maryam” to tell their story and listen to the others. Muslim women of different age, profession and social background shared their experience, impressions, conclusions, and also shared some advice on overcoming difficulties.

Those stories caught interest of non-Muslim women as well. The latter noted that the society is rather tenuous when it comes to conceiving women dressed up according to the Shariah demands, as the decision to cover up is not just about changing a foreside, but rather an indicator of a serious inner transformation.

Another popular myth says that girls cover up and revert to Islam just to marry a Muslim man. The reality, however, reveals a completely different pattern: most women start searching a Muslim husband after they are already reverted because of their world view and inner reasons, not vice versa.

Then again, the facilitators provided more than plain communication: the guests participated in a quiz, blindly picked small presents from a bag, and were invited fot tea and sweet buffet.