“Encore”: Shaikh Haydar Repeated His Workshop On Memorizing The Qur’an 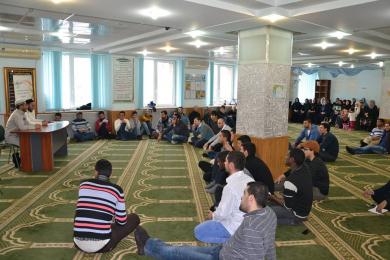 Visitors of Kharkiv Islamic Cultural Centre dedicated their day-off on Saturday to a workshop on learning the tajweed. Shaikh Haydar Al-Hajj, a guest from Kyiv who arrived at their invitation, prepared a series of lectures on correct articulation of Arabic letters, reciting and memorizing the Holy Book.

It bears reminding that the Shaikh has already held a similar seminar at Kyiv ICC last October. Shaikh Haydar had a good reason to facilitate that seminar: being a teacher of Qur’an and Tajweed at Kyiv Islamic Cultural Centre, he constantly noticed the same mistakes made by his students of both sexes, and corrected them every time, — just to confirm his opinion that without ground base only a few people really remember their mistakes and try to avoid them in the future.

This time, the initiative came from Kharkiv Muslims: having learned about the October seminar from their Kyiv adherents, who eagerly shared their impressions, they turned on the heat to hold such event in their city, too. So they approached the Shaikh and asked him to find some time in his busy schedule for visiting the former capital (ed.: Kharkiv was the first capital of Soviet Ukraine since Kyiv resistance to Russian communists lasted longer).

It’s notable that even those parishioners who are native speakers of Arabic eagerly attended the seminar and never complained for wasting their free time.