Are Muslim Women Oppressed? — Why Not Ask Themselves? 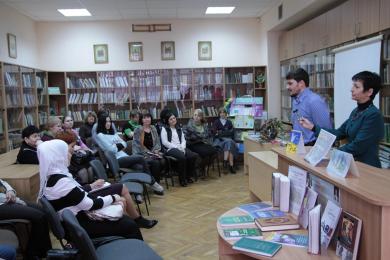 Are Muslim Women Oppressed? — Why Not Ask Themselves?

Image of a Muslim woman is seen by an average non-Muslim as a set of cliches: rightless, illiterate, intimidated by parents, brothers, husband. It’s amazing how many people continue to view the female followers of Islam amain in our informational era — strictly within the listed set of cliches and being absolutely sure that’s what Islam is about. But this is absolutely wrong!

For that reason, administration of Saltykov-Shchedrin Kyiv Library presented its readers with an opportunity to learn all about it right from the guests from Kyiv Islamic Cultural Centre, Ms.Irina Ashur, a teacher at “Our Future” Gymnasium, and Mr.Tariq Sarhan, head of Islamic Culture Department.

Readers and employees of the library were surprised to learn that Islam wasn’t at all a “religion meant for oppressing women”. Prophet Muhammad, peace and blessings be upon him, encouraged women to gain knowledge, social activities and sports in every possible way, and ordered the men to treat the women in the best manner. The Prophet, peace and blessings be upon him, considered this matter to be of such a great importance that he explained it once again in his well-known last sermon.

“Everybody in this world thinks that Muslim women need to be rescued, while the women themselves have no idea about their “miserable state”. On the contrary, the women who are treated strictly according to the rulings of Islam do not have any attitude problems — the problems begin when the men are ignorant of their faith,” Mr.Sarhan stressed.

Ms.Irina Ashur, on her part, shared her own experience: she lived in Palestine for 8 years and learned at first hand that women from religious families where all the members try to follow the rulings of God as much as possible have the most respect, care and psychological comfort.

Ms.Ashur also invited everyone interested to learn more about women in Islam by attending the annual conference “Custodian Of The Present And The Future” which is to be held at Kyiv ICC on March 21

During the event, questions were asked mostly by readers, while the library staff listened silently. Things changed during the “after-party”: the ladies seemed more confident in private and didn’t fail to ask is the things they saw in various series like “Clone” or “Glorious Age” were real. and were happy to learn that the facts that got them stricken were only the script writers’ imagination.