“See And Be Seen”: Wushu Demo Lesson At Kyiv ICC 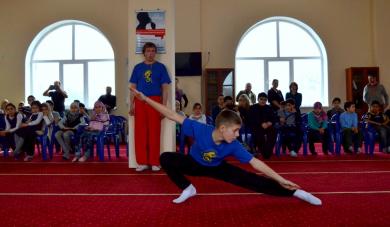 “See And Be Seen”: Wushu Demo Lesson At Kyiv ICC

Two trainers, Mr.Ihor Semko and Mr.Oleh Lomenko, along with 18 of their pupils of “Brovary Wushu Club”, held a demo lesson at Kyiv Islamic Cultural Centre Mosque. THey demonstrated the abilities the pupils gained after three years of thorough training: they performed fighting-stick and sword battles, and contact wrestling.

Mr.Semko launched a Wushu department at Gymnasium “Our Future” ran by Kyiv ICC. A group of 12 boys has been practicing for a month already, and they are planning to launch a group for girls as well. “When we settled everything with the Gymnasium administration and first announced the department, many parents came and asked what this sport was, and what would their children learn, so I realized that it was easier to demonstrate than to tell. For that reason, we scheduled a demo lesson, so that the 3rd year students would demonstrate their skills,” the trainer said.

All the pupils demonstrated flexibility, skills of attacking and fighting back, falling on the ground safely. The elder boys were fascinated by the battle performance, both the straight fight and two on to one.

For the pupils and their parents this visit, however, wasn’t only a chance to be seen, but to see something new for them: they took a short excursion over the mosque and were told general information of how Muslims make ablution and pray, how they behave when is the mosque, etiquette of attending the Friday preaching. “I took a tour around the mosque, you know, and it was sooooo interesting there!” — one of the mothers was saying, while speaking on the phone to someone.