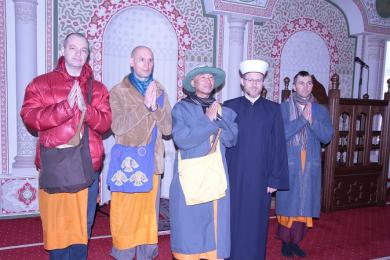 Unusual guests visited Kyiv Islamic Cultural Centre on March 31: Junsei Terasawa (Japanese: 寺沢潤世), a Japanese Buddhist monk, peacemaker and and Teacher of Monk Order Nipponzan Myōhōji in Ukraine, Russia and Central Asia, brought his students to meet his new acquaintance, Mufti of RAMU “Umma” Said Ismagilov, and discuss further perspectives of cooperation between the followers of the two religions.The guest noted that Ukraine is in some way a unique country, as people of different religions here are more open and tolerant to one another.

They didn’t fail to mention the informational war against Ukraine, which, with the background of military aggression in the East of the country and systematic violation of human rights and freedoms in the occupied Crimea, deflects the world society’s perception of what is going on in our country. People are so overwhelmed with enormous amount of lies, that they have but very little chance to resurface that swamp of lies and see the truth.

Said Ismagilov asked Terasawa-syonin, a well-known influential public figure and peace-maker, to spread information about Ukraine and local events both among the world leaders and general public. The Buddhist monk agreed that such informational campaign is of a very high demand at the moment.

Mufti and sensei first met several days earlier on March 28, during an interfaith prayer for Ukraine on Sofiys’ka Square (Kyiv). Topics to discuss were easily found: Junsei Terasawa, as well as Said Ismagilov, actively supported Maidan and stood against annexation of the Crimean peninsula: “Ukrainian people on Maidan demonstrated their indisposition to be a part of such an aggressive country as Russia. Putin’s Russia was behind the hell in Chechnya and bloodsheds in Syria. Putin, however, fully demonstrated his madness and lost his face completely for the rest of the world when he invaded Ukraine with his troops”.

Yet standing against Russia isn’t at all something new for the Japanese guest: he was on the barricades near the “White House” in Moscow in 1991, co-organized “The March of Mothers’ Compassion” from Moscow to Grozny in 1995, severely criticized actions of the Russian Federal Armed Forces in North Caucasus during the session of UN Committee for Human Rights in Geneva in 2000. He also wrote an open letter to President Putin, calling him to withdraw his troops from Chechnya.

He was denied a visa to Russia in 2000 and banned from entering the country until 2012, as, according to popular opinion in FSS (Federal Security Service), “his actions in the context of Chechen situation were anti-Russian”. The sensei, however, managed to visit Russia in February, 2012, and even participated in the march of protest on Bolotnaya Square on February 4, and also spoke in Sakharov centre. In April 2012 Junsei Terasawa was once again banned from coming to Russia, this time until 2017.