Pupils of Gymnasium “Our Future” Collected Aid For Resettled Children 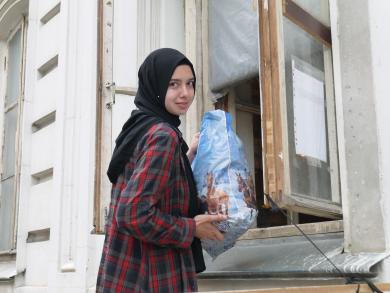 Pupils of Gymnasium “Our Future” Collected Aid For Resettled Children

Volunteers of Reception Station for helping the internally displaced people (9/11 Frolivska Str.) were pleasantly surprised when they were approached on behalf of Gymnasium “Our Future” and asked what they needed most for the resettled children, as there was money earned by the pupils on April 24 charity fair which they wanted to spend on something useful.

The schoolchildren raised UAH2,300 and wanted to spend the money on something the little resettled children needed the most, in order to use this money as effective as possible. Volunteers of the Station, Ms.Tamara Romanova and Ms.Lesya Litvinova, confabulated and asked to buy diapers of the smallest sizes, and some powdered baby food. “Please explain your pupils that it’s not such a big problem to provide toddlers and the older children with necessary things, as they eat adult food and say when they need to use the toilet, and, thank God, people bring enough children’s clothing now… But we’re in a constant need of the smallest diapers and baby food,” — Ms.Tamara Romanova explained.

So said, so done: the diapers and powdered baby food were bought between the May holidays and delivered to the Station last Thursday. The teachers also used that opportunity to deliver the clothes brought to the Mosque for giveaway.

Ms.Lesya Litvinova who accepted the baby items asked to tell their great thanks to the pupils for such a wonderful initiative and caring for other people in such a young age, taking every opportunity available for them in order to help.

Even the first-year pupils participated in a charity fair in the yard of Kyiv Islamic Cultural Centre: administration and teachers of the Gymnasium unanimously agreed that non indifference for compatriots is a necessary part of education.

Ms.Natalya Petrovich, a teacher, noted that the kids eagerly participated, knowing that the money was to be spent on charity: “They knew that the money was to be spent for charity and everything they have made could help other children who lost their homes and essentials because of the military actions. You should have seen how enthusiastic they were during the whole week of preparations, now they advertised their goods and how they worried that the smallest cookie wouldn’t remain unclaimed!”

It bears reminding that there was a large congregation of people in the yard of kyiv Islamic Cultural Centre on Friday, April 24. Handmade, drawings and a variety of bakery (cakes, pies, etc.) were persented for the parisioners of the local mosque, staff and parents.Little artists and chefs exuded pure joy every time they sold something, as all the items were made with sincere wish to help others.