Qur’an as a Permanent Companion for Sumy Muslims 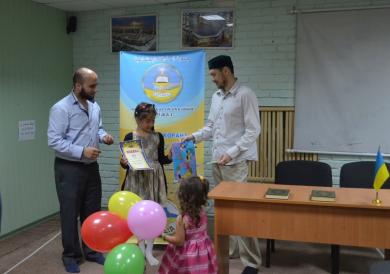 Participants received certificates of recognition and presents for their thorough study and beautiful recitation.

Sumy Social Organisation “Friendship” was filled with many children’s voices last Sunday, on June 14, as a Qur’an reciting contest for children was held. The participants aged 5–12 competed in knowledge and recitation of surah #88, “The Overwhelming”, which reminds of the importance of observing God’s signs and taking them into deliberation.

Inspired by their peers, almost all the other children started reciting something from the Qur’an as well, everybody elocuted what they knew well. Such “out of competition recitation” were highly appreciated by the Jury, however, one needed to perform the given task in order to win the prize. And the kids were great in that: three prizes were won by the three girls, Yasmeen Suleiman (aged 8), Sarah-Maria Sartawee (aged 8) and Maryana Suleiman (Aged 5). They received certificates of recognition and presents for their thorough study and beautiful recitation.

The Jury stressed that it was very important to maintain competition on something good, and that such contests were important as regular reading of the Holy book helps a human being to constantly maintain their link with the Creator and restrain from going crook following one of the seductions of the modern world.

And, of course, there was a sweet buffet, as no children’s party is possible without sweets!