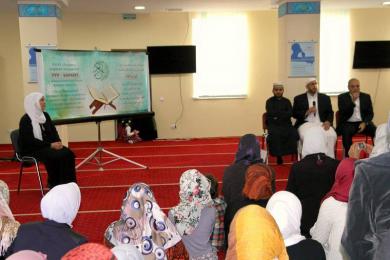 Another hafidhah, Ms.Noon Baraghooth, joined the ranks of women who successfully completed reciting the Holy Book for her hafth Bin Asim degree, having become the fourth participant of the Qur’an Memorizing Circle “Firdows” who received a respective certificate, after Ms. Samia Arada, Ms.Vira Fryndak and Ms.Najah Sweidan.

The event itself, with all the female parishioners present, began with Ms.Baraghooth’s recitation of her final Surahs under the supervision of Shaikh Haydar Al-Hajj, with her husband, daughters and grandchildren cheering for her. They also were the first to congratulate her upon the successful termination of her course. Now, having received a certificate, Noon can teach this style of recitation herself after she passes her tajweed exam.

She thanked her teachers for his help and patience, and her family for being very supportive and having complete faith in her.

This achievement is very important for Noon not only because of her love for the Holy Book, but also because that was a chance for her to achieve the dream of her childhood. Long time ago, she and her friend made their point to become hafidzah by all means. The other girl achieved that goal earlier, and Noon, having entered a Medical University, had to postpone her Qur’an memorization course. Later, she got married, had her children born, educated, married and got their own children… still, the women felt that something important was missing in her life for all of those years.

For that reason, when a Women’s Qur’an Memorization Circle “Firdaws” was launched at Kyiv Islamic Cultural Centre, she joined it immediately. Fellow students not only helped her maintain regular training schedule, but also set the high pace: three women completed reciting the Holy Book for her hafth Bin Asim degree and got their certificates in the course of past year. And they were one of the first people to greet Noon Baraghooth upon the completion of her own course and achieving her long-awaited dream f becoming a hafidzah last Friday.