“You’re My Best Gift!”*: Pupils of Boarding Schools Asked the Volunteers to Stay 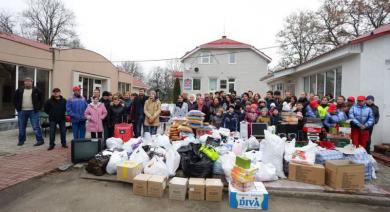 It took about two weeks for the activists to collect donations & provision in order to bring them to pupils of two boarding schools and one baby orphanage.

It took about two weeks for the Women’s Social Organisation activists to collect clothes, footwear, money donations, provision and household appliances in order to bring them to pupils of two boarding schools and one baby orphanage. And this Saturday, on November 7, four fully packed cars left the Kyiv ICC yard to join the caravan of cars of other participants of the charity project “Varti Uvagy” (Ukr. “Worth Attention”) and deliver all the necessary goods, such as clothing, footwear, provision, medications, diapers, two TV-sets and two DVDs, and a gas chainsaw (for fuelwood cutting).

The volunteers visited three children’s facilities, namely one in Korostyshiv, one in Kmytiv, one in Novohrad-Volynskiy. Children aged 5 to 18 are maintained at the first two of them, and from birth to 5 — in the last one. They brought presents and a sweet buffet, and held some master-classes on quilling, henna, felting for the girls, while the men played basketball and other sports games with the boys, as the weather has been fortunately fine.

Each facility has its own approach to raising children. In Korostyshiv, for instance, the director treats his pupils as his good friends, trying to find and promote some strong sides of each person that may help them in their further life. It’s a little different in Kmytiv, where more attention is paid to discipline. But, of course, every child dreams of a home, a family, of loving parents, and usual things are like a little fest for them. For instance, the volunteers hardly held back their tears when they treated the kids with candies and heard their happy voices: “Oh my! Candies! It’s a fortune!”

They came to the baby orphanage in the late afternoon when it was already getting dark, but just on time to meet the little ones waking up from their afternoon nap. Kids who just have enough sleep were full of energy, hugged the guests, asked uppy, and wanted the guests to play with them. They didn’t let the visitors go for a very long time, asking them “to play some more”.

According to Ms.Maryam Abdallah, who was one of the initiators of joining the benefit, that trip allowed the Muslims to see the other side of orphans’ lives: “I strongly wish that this initiative is continued, for we want to give those children more warmth and comfort and care and joy. I want to express my greatest gratitude for the facilitators of the trip, Ms.Elena Manuilova and Mr.Vlad Rol-Shiliaev and everyone who has been with us on that day!”

*a line from a song in a popular Soviet children’s cartoon “Nu, Pogodi!”