One Can Lock up a Person’s Body, but Can’t Lock Their Mind and Soul 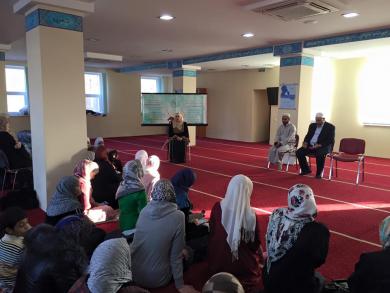 Another Kyiv Muslim woman, Ms.Manal Kanoo’, successfully completed reciting the Holy Book for her hafth Bin Asim degree, having become the fifth participant of the Qur’an reciting circle “Al-Firdaws” (facilitated by the Centre of Women Development “Maryam”) who received a respective certificate.

The event itself, with all the female parishioners (which were quite a crowd after the Juma prayer) present, traditionally began with Ms.Kanoo’s recitation of her final Surahs under the supervision of Staikh Haydar Al-Hajj. Now, having received a certificate, she can teach this style of recitation herself after she passes her tajweed exam.

Manal has tarted her Qur’an memorization for several times, and even managed to learn 7 juz. Jet the woman had to struggle against her own memory, forgetting and relearning the same verses. When filling in the questionnaire to join the “Al-Firdaws” Circle, she indicated in the block “how much of the Holy Book you already know so far?” — “7 juz, but I don’t always remember them”. And then she had that feeling of exercise anxiety, and she gave herself a word to finally learn 7 juz well and sound, and to by all means memorize the whole Qur’an.

The woman tried hard and had a consistent progress, when she found herself with a high-risk pregnancy locked in the solitude of her own flat, without any chance to attend her Qur’an classes.

Manal was really depressed by her situation and forced isolation at first, and then she decided it was the time to stop complaining and get to work — and started memorizing the Holy Book on her own, which improved her self-discipline. Besides, an accident helped: her neighbour and good friend Najah Sweidan, who was also memorizing the Qur’an at that time (she successfully completed her course on June 19) had her leg broken and was limited in her transfers. So, Sheikh Haydar allowed the two women to cooperate and check each other’s recitation, and both of them had a powerful motivation to proceed. Now both of them achieved the high title of “hafidhah”.