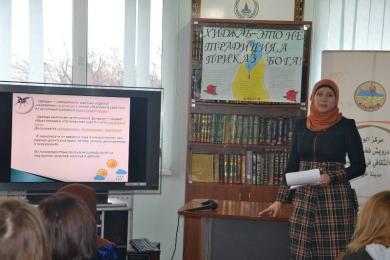 “Alraid” Islamic Cultural Centres are usually open for everyone, both Muslims and non-Muslims willing to learn more about Islam. However, themed events on women’s clothing are, as a rule, mostly attended by women only. The situation was different this time, as the themed event at Kharkiv ICC on February 14, dedicated to World Hijab Day, was attended by non-Muslim men as well.

After a short background information on evolution of clothes in general and Islamic prescription to dress modestly (which, in fact, echoes the other Abrahamic religions as well), the guests were given a chance to try their knowledge of ethnography and name the country of origin for several sample sof women’s headdress exhibited: Ukrainian, Russian, Chuvash, Kazakh, Afghan, Tajik, Azerbaijan and Turkmen. The winners were awarded on that very evening.

BEsides, three girls presented results of their own experiment: non-hijabi Muslims made a headscarf a must for themselves during a month, and then shared their stories and emotions during that image transformation. As a result, they didn’t want to take it off when the experiment was over, so used to it they’ve gotten.

Every girl and woman present could make the same experiment, at least for one evening, for the organisers offered a master-class on various types of styling the headscarf. Besides, the ladies could decorate their arms with mehendi, which was available for anyone as well.

Discussing the events of the evening over a cup of tea or coffee with sweets, the guests shared their emotions and thanked the organisers for such an interesting meeting.