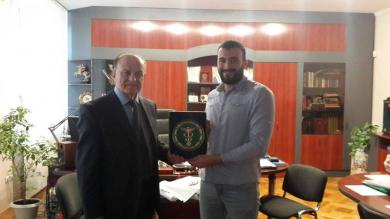 Abu Musab Busin, the head of the Public organisation “Al-Isra” and its Head of the Public RelationsDepartment,Salim Moussa, had a meeting with Professor Vasyl Moroz, the rector of National Pirogov Memorial Medical University of Vinnytsia

Muslims of Vinnytsia congratulated the professor with the holidays and explained the main directions of organisation’s activity. Also they presented him the translation of the Holy Quran in Ukrainian language by Mikhaylo Yakubovych and the calendar for 2017, which marked the important dates for the Muslims.

Vasyl Moroz noted that he held the Ukrainian translation of the holy Muslim book in his hands for the first time, and promised to read it for sure.

In turn, the guests from Vinnytsia ICC were awarded for "the active participation in the project "Taking caretogether for children with serious diseases ", which was initiated by the Vinnitsa Medical Association. The purpose of this program is to combine the opportunitiesof state, civil society institutions, businessmen, utilities and concerned citizens in order to support and to helpthe children with serious diseases in a comprehensive manner.