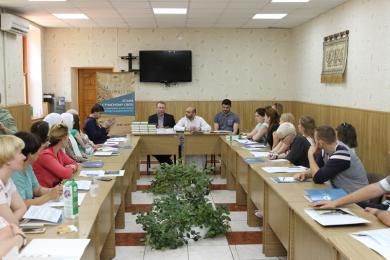 There’s a good reason why VI Summer School of Islamic Studies is called International, for it really is. Participants from Belgium, Poland, Azerbaijan, not to mention many Ukrainian towns and cities. Celebrated researchers whose fields of interest include Philosophy, Religious Studies, History, Cultural Anthropology, Sociology, Ethnography, etc., gave the benefit of their knowledge and experience to their future colleagues, still students and PG students of Ukrainian Universities.

Discussions after each presentation are up to the PhD viva examination knocker, for everyone in the room is very well aware of the specific context.

We would like to mention several lectures and presentations that took place over the past days. Thus, Mufti of Religious Administration of muslims of Ukraine Said Ismagilov defined the evolution of Ukrainian society’s attitude towards Islam and Muslims, told why different sociological surveys show controversial results, what are the trends in the field of cooperation between different sects. He also mentioned what factors make the image of a Muslim for an average citizen, role of the Media in that process, and the level of religious freedom in both Ukraine and the rest of the world.

In his research “Muslims in Exile”, Master of Liberal Arts of Istanbul Ibn Haldun University Gregorii Mavrov analyzed the statistics of migration from predominantly muslim countries to the states dominated by non-Muslims. He explained the reasons motivating Muslims to migrate to some secular states, spoke about the differences between ethnic expat communities in the European countries; about integration (or lack of integration) of Muslims in the social life of their countries of domicile, their involvement in political life, etc.

Famous Azerbaijani Politologist and Teimur Ataev presented both his report “Political Islam: a Phenomenon or an Imposed Cliche” and the two of his books published under the auspices of  CSUAUA “Alraid”, namely “Russia’s Caucasian Collisions (From Peter I to Joseph Stalin)” and “Excerpts on the History of Geopolitical Conflict Over the Territories of Russia, Ukraine, belarus and Baltia”.

Ukrainian orientalist and translator Mykhailo Yakubovych dedicated his second report to the issue of the Ukrainian Muslims’ involvement if the latest social-political processes: “Muslims in Military-Political of Ukraine in 2013-2016”.

At once two researchers spoke about the phenomenon of interest for Islam and Muslims shown by modern Ukrainian writers: PhD Solomia Vivchar, the Senior Scientific Researcher, and Victoria Nazaruk, lecturer at Journalism Department of National University “Ostroh Academy”.

A research “Topical Issues of Modern Islam in Interpretations of Homeland Researchers” by PhD Dmytro Bazyk, Academic Secretary at Religious Studie Department at Institute of Philosophy of NAS  gave everyone the opportunity to look at themselves from the outside, and the following discussion turned into a full-scale round table.

Oleksii Savchenko, a research officer at National Museum of History of Ukraine, spoke about Western Tatars in Galicia.

Olha Matychak, teaching assistant at Management Sociology Department at Donetsk State Management University (in the city of Mariupol) presented her “Social dimension in Islam: Sociological Aspects of Researching”, and Danyil Rebro spoke about Socio-cultural Islamic context in Trans-Azov in both historical times and modern days.