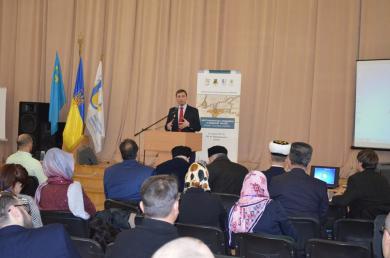 Seyran Aryfov, Head of the All-Ukrainian Association “Alraid”, having noted that researching the past is never a waste of effort.

Theologists and religious studies experts, philosophers, historians, sociologists, representatives of religious and social organisations gathered in Kyiv on 14 December. The event that brought together specialists from not only all around Ukraine, but from Turkey, Belarus, Moldova  and Azerbaijan as well, was the International Research-to-Practice Conference “Muslim Heritage in Southern Ukraine: History, Culture and Religion”, organized and held by Ukrainian Centre for Islamic Studies, Centre of Islamic Studies of the National University “Ostroh Academy”, CSUAUA “Alraid” and Volodymyr Vernadskii Tavrian National University. The event was moderated by Mykhailo Yakubovych, the famous Ukrainian historian, orientalist and translator (and also the author of full Ukrainian translation of the meanings of the Holy Qur’an).

Seyran Aryfov, Head of the All-Ukrainian Association “Alraid”, started his speech with thanking God Almighty for the organizers being able to gather specialists from different cities and countries in one room having noted that researching the past is never a waste of effort:

— It’s an open secret that all the world’s processes, all the great perturbations have, no doubt, their reasons in the past. The same goes for Ukraine: we live in a troubled moment, and it certainly has its reasons in the past, not perhaps the recent history, but the hoar of innumerable ages. By researching our past, we gain a better understanding of the current events, particularly in the field of interfaith and interconfessional relations, — noted Mr. Aryfov.

According to Mutti Said Ismagilov who is also the Head of the Ukrainian Centre for Islamic Studies, presentations of foreign guests were particularly interesting:

— It’s always interesting to see Ukraine and our history through the foreign researchers’ eyes, for instance, the researchers from Turkey, Moldova, Belarus and Azerbaijan. It occurs that things we take for granted, as indisputable facts, are not facts for them at all, for their sources are different. The Turkish professor strongly disagrees that the Ottoman Empire has been, in fact, an Empire; a researcher from Azerbaijan has a totally different view on the evitions of Crimean Urums and Armenians; people in modern Belarus know nothing about the vast repressions against the Crimean Tatars on the peninsula, for their news only show plots on Russia’s “great achievements” and “improving life here and now”. We can’t, of course, agree with all that, but knowing exactly how people and researchers of some country see us is quite useful and interesting.

Yurii Kochubei, a prominent researcher and diplomat, greeted the gathering in Ukrainian and Turkish, on behalf of the National Academy Of Science Antagenel Krymskiy Institute of Oriental Studies. He stressed that Ukrainians and Crimean Tatars are able to return Crimea and all its heritage when united, and must do exactly that.

— It’s a fact of little importance what this heritage is, is it Cristian, Antique or Muslim (indeed, the Muslim heritage prevails). And in order to get it back, we must act with the utmost stretch of our powers [....]. That is the only way to dispel all those myths that were force fed to us, and live on normally in our independent Ukrainian State.

Almost two decades of scientific reconnaissance in the matter of the main topic were presented to the honourable audience during the three sessions, namely “Islam in the history of Crimea and Crimean Tatars”, “Islam on the continental Ukraine”, and “Ukrainian Islam in terms of international ties”. The organizer intentionally avoided separating those sections in different locations, so that every participant would be able to hear each report and participate in its discussion.