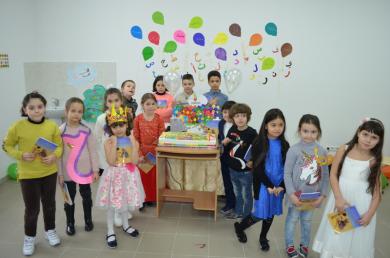 On Tuesday, 30 January, Kharkiv Branch Gymnasium “Our Future” celebrated Arabic Language Day. Of course, UN Arabic Language Day was more than a month earlier, on 18 December/ but back then part of the pupils were on sick leaves, and later winter holidays arrived… Still, being the only Kharkiv general education institution where Arabic was taught, the Gymnasium couldn’t simply give up on such an occasion.

Since morning, the schoolchildren participated in a variety of activities, in order to revise what they’ve already learned at school while playing. For instance, they withdrew arabic letters from balloons and combined them in words, which they then glued to related pictures. They also attended a puppet show, where the dialogues the kids already knew were played and the the puppet actors made intended mistakes while the children had to detect and correct them.

Every child was dressed in a themed costume dedicated to certain Arabic letter, and recited a rhyme about that letter — in Arabic, of course.

After the brain workout, the students could stretch their muscles as well: they were sack racing, jumping, rope pulling, rope jumping, and the winners got one letter for each contest. Their goal was collecting the full Arabic alphabet.

In the end, each of the little competitors was presented with a children’s book of Islamic stories, and then everyone was invited to the canteen in order to have their piece of cake. The cake, of course, was decorated with Arabic letters.