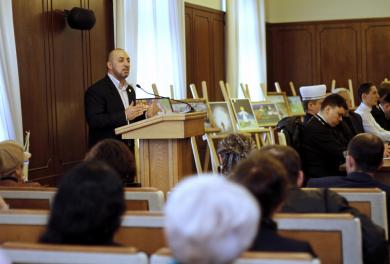 Ironically, just about a week after his home was rummaged in search for literature “promoting interfaith or interethnic hatred ”, Tariq Sarhan moderated (as it had been planned) a Forum on Interfaith Cohesion at Kyiv Region Stated Administration (KRSA).

The event was held in order to discuss matters of religion-based discrimination, solving interfaith conflicts and role of the religious leaders in overcoming enmity. In the room were present Tariq Sarhan, Oleksandr Dukhovniy (Ukraine’s Supreme Rabbi of Progressive Judaism Communities) and Leokadia Herasymenko (Head of  Head of the Union of Ukrainian Women). Still, each and every participant had enough experience of social service and had something to share with the others: state officials and public persons, representatives of most of Ukrainian religious organisations, activists of Informal Group of Interfaith Cohesion, Women’s Social Organisation “Maryam” and Volunteers’ Movement “Mariam”, etc.

Before the opening, the participants viewed an exhibition “Warless World Through the Children’s Eyes”, and then Mr.Dmytro Nazarenko (Head of the KRSA) and Mr.Ihor Podolianets (Hear of KRSA’s Department of Culture, Nationalities and Religion).