International Women's Forum, a Chance to Get Inspired by Other Women’s Achievements 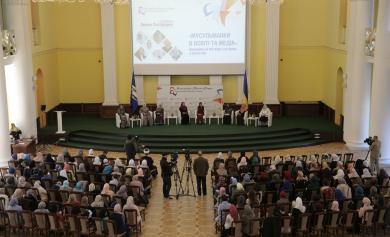 Kyiv City Hall had never accommodated so many women is headscarves before: on 7 April (Saturday) over two hundred ladies were discussing important problems there, as well as getting inspiration from their sisters and picking up some useful advice. They also participated in a charity fair, where all the raised money would be given for the benefit of orphans.

The Forum gathered both Muslimahs and women of other religious views. Even the Christians (and the Forum was held on the day before Orthodox Easter) found an opportunity to join the event for at least few hours. Women from Kyiv and all over Ukraine, as well as from abroad (Turkey, Kuwait, Belorussia and Moldova) attended the event.

As for the topics covered, the participants spoke about the women’s role in the society, human rights protection, volunteering, the topics of the professional and artistic fulfillment, and combining work and social activities with being a wife and a mother. They also spoke about the women’s inner strength and the impact one “small and average” person can make. Mothers of large families were the role models that you can be both good at parenting and still be socially active and successful.

During the opening ceremony, the participants were greeted by Mufti of Religious Administration of muslims of Ukraine “Umma” Said Ismagilov. He stressed the great input of Ukrainian Muslimahs in combating stereotypes and Islamophobia, and made mention of their efforts of preserving Muslim identity and at the same time integration of the followers of Islam to all spheres of life.

Noteworthy, the Forum was held by Ukrainian Muslimahs League and Social Organisation “Maryam”.