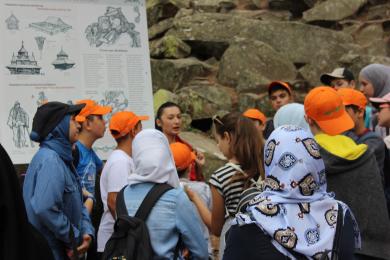 Sheer hope is stronger than a bad weather forecast: hopes of the participants of “Druzhba”-2018 camp for sunny days came true, while the rainy weather forecast didn’t. Thus, they were able to visit Bukovel, where the kids rode the cable cars, and Huk waterfall. Backpacking to Dovbush Rock was also a success, where the junior group (the children were divided in two groups due to their age; with a separate guide for each group) got tired and had to cut the walk short, and went berrying instead of completing the initial route.

They had master-classes on making felt and cardboard key fobs, and even made dumplings for dinner. They made as many as 650 dumplings, so the activity counselors had a hard time making sure that each piece of dough was rolled out evenly, and that each dumpling was sealed thoroughly.

The kids participated in a contest where they made short motion pictures on their life and relations in the camp. Five videos med it to the final and were evaluated by the jury.

In the nearest future, a presentation is to be held with illustrations for stories from the Qur’an: the young artist will first show their spray-painted drawings of some Qur’anic storylines and offer the audience to try and guess where that illustration belongs, and only after that they’ll gave a more detailed presentation on that story. Archery competition is yet to come (where the best archer can win their very own bow!), as well as master-class on felt accessoires.

Tarik Sarhan’s stories at the campfire only add to the daily  impressions.