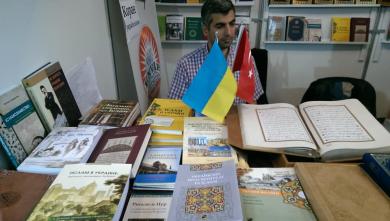 The current visit of Azerbaijani political scientist Teymur Ataev to Ukraine proved to be very favorably endowed with events. On September 19, he was at the presentation of his books in Kyiv, and already the next day he participated in the International Book Forum in Lviv. The Head of Franko Literary and Memorial Museum, Bohdan Tykholoz, opened the Ataev’s books presentation in Lviv, noting that “Franko’s House” (“Dim Franka”) always supported such events, because they contributed to cross-cultural, cross-ethnic, and cross-religious dialogue. The event was launched by the museum researcher, Solomia Vivchar.

Teymur Ataev, of course, presented two last publications: “Excerpts on the History of Political Battles for the Territory of Russia, Ukraine, Belarus and the Baltic Region”, which has already been published in Russian, and now in Ukrainian («З історії політичної боротьби за території Росії, України, Білорусі та Балтії»), and "Islam in Ukraine: past, present, future" in Russian language.

The first book covers the period from ancient Rus, the relationship of the Rus’ tribes in the struggle for the Kyiv throne, centralization, relations with Byzantium, unobvious factors that contributed to the emergence of a new political center, Moscow, the emergence of the “Third Rome" concept, as well as the development of religious life, left bank Ukraine’s relations with Moscow and others.

The second book covers the history and present times of Ukrainian Muslims that is a series of essays covering more than 10 centuries.

The books were published with the assistance of the PU “All-Ukrainian Association “Alraid” and RAMU “Ummah”. The Association tried to make this gift to Ukrainian readers at its 20th anniversary, therefore, the representatives of "Alraid" and the RAMU "Ummah", namely the director of Muhammad Asad Islamic Cultural Center (Lviv), Amin Alkasim, deputy mufti of the RAMU "Ummah", imam of the Lviv mosque, Murad Suleymanov, and the president of the RAMU "Ummah", Oleh Guzik, were given the opportunity to address the audience.