Congratulations for the Prizewinners of All-Ukrainian Qur’an Recitation Contest-2018! 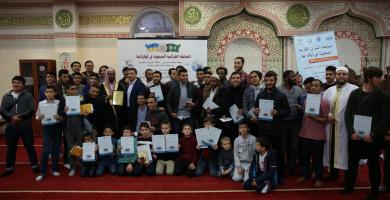 Over 80 participants, men, women and children of all ages, took their chance and participated in XIX All-Ukrainian Qur’an Recitation Contest that was held at Kyiv Islamic Cultural Centre on 10-11 November.

We would like to congratulate the prizewinners in each of the cathegories:

When opening the awards ceremony, Head of the CSUAUA “Alraid” Seyran Aryfov noted that he felt both joy (for the team was able to put together such a pious contest where people competed in their knowledge of the God’s Scripture) and sorrow (for such a wonderful event had come to an end). He reminded that every Muslim had to conclude each good deed with a dua prayer that the deed was accepted. For that reason, Mr.Aryfov reminded all the participants, facilitators and the jury to always remember the importance of dua so that their efforts would be accepted despite the lacks and faults. In conclusion, Sheikh Seyran thanked all the organisators, participants, members of the honourable jury, and everyone who invested their time and efforts into the contest.