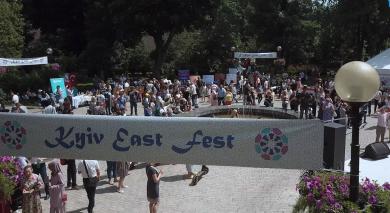 Azerbaijan sweets and Crimean tatar ceramics; sharp knives and balloons; Arab goodies and Turkish souvenirs and printed editions; icy soft drinks — and steaming hot coffee brewed on hot sand; leisurely backgammon game — and fiery Caucasian, Crimean Tatar, Egyptian and Palestinian dances — all that awaited Kyiv citizens on 5 June at Taras Shevchenko Park where Kyiv East Fest was held. This year, the festival became too big for the local Islamic Cultural Centre’s yard, so the organisers, supported by the city authorities, found a location that could accommodate everyone willing without getting overcrowded.

When opening the festival, the hosts expressed hope that nobody could stay indifferent and everyone remembered the event as the celebration of friendship, solidarity and mutual understanding between people of different cultures, traditions and religions. And have those hopes been fulfilled!

The children’s zone attracted parents and grandparents, who  brought their little ones to the local playground; activities lovers participated in sport games and lezghinka dancing workshop; admirers of beautiful headdresses and unusual cut of garments crowded the women’s pavilion along with the ladies willing to decorate their arms with henna patterns; and those willing to learn something new attended the lectorium.

As usual, women were more eager to participate in different activities: they had their headscarves beautifully tied, their hands Mehendi, and were most involved in every workshop. Among the guests, there were diplomats, namely Indonesian ambassadors and his wife.

For the guests, oud (a short-neck lute-type, pear-shaped stringed instrument chordophone, widespread in Transcaucasus, Central Asia and Middle East since VI AD; was later brought by Arabs to Europe where it transformed in lute) was played, read poems and sang songs. There even was a school uniform fashion show by a Ukrainian Muslimah designer Katin KYM. Most performers were amateurs, but there were also professional artists to hit the stage, like the duet of People's Artist of Ukraine (and the only person of Azerbaijan origin with that title) Gurbanali Abbasov and Ukrainian singer and actress Natalia Kudriashova; “Kavkaz” dancing ensemble and “Krymska Rodyna” dancing ensemble…

In his greetings, Mufti of RAMU “Umma” Said Ismagilov stressed that it was the second day of a very important Muslim holiday, Eid al-Adha, celebrated by Muslims all over the world; and that Ukrainian Muslims wanted to share their joy from that occasion with their non-Muslim compatriots. He drew everyone’s attention that the young man, who opened the event with traditional recitation of some verses of the Holy Qur’an, recited the ayahs where God Almighty said: “O you mankind, surely We created you of a male and a female, and We have made you races and tribes that you may get mutually acquainted.” [Qur’an, 49:13]

— That’s exactly the reason we’re holding this festival today —  to get a chance to know each other better, and that the Ukrainian Muslim community could make their input in our common happy future, pace and mutual respect and unity of Ukrainian political nation. We hope that the festival becomes annual, and becomes better each year. I pray for peace and God’s blessings for Ukraine and the people of Ukraine. [...] Let the festival be our input in unity, friendliness and better future for the Ukrainian society. I thank everyone who joined the festival, every guest here. God bless Ukraine!

Ms.Diana Popova, Director of Kyiv City Administration’s Department of Culture, started her speech with Muslim traditional greeting of peace, “assalamu aleikum to honorable Muslim community!” She then congratulated the followers of Islam upon Eid al-Fitr, on behalf of the Mayor, Vitali Klitschko, and herself. Ms. Popova thanked for that beautiful fest and a chance to join it.

Islamic Cultural Centre Director, Mr.Ismail Qady, also had a word for the gathering:

— On behalf of SCUAUA “Alraid”, I would like to greet you all and wish you peace, goodness, and happiness. I hope that events like this one promote stronger connections between different religious groups in Ukraine, the wonderful country where people of different religions live in peace and cohesion, understanding, respecting and supporting one another, [...] being great role models for the rest of the world. Peace, blessings and all the best be upon you!